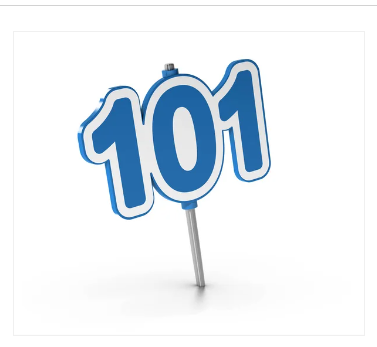 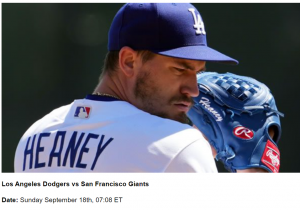 The Dodgers won for the 100th time in 2022 on Saturday night.  This was the fastest for a team to get to 100 since 2001.  It did not go too well for that team in the playoffs. It was the last time Seattle made the playoffs until possibly 2022.

It was a cold wet day on Sunday in SF for another Sunday night ESPN game.  Andrew Heaney vs Alex Cobb.  The last time Heaney faced the Giants, he gave up 6 runs including 4 HRs.  Cobb shut out Atlanta for 7.0 IP in his last game.  His last game against the Dodgers was 5.1 IP where he allowed 2 runs on 4 hits.  Cobb had 12.0 shutout IP in the 2 previous starts before his last game against LAD.  So sandwiched around his September 5 start against LAD, Cobb had 19.0 shoutout IP.

The Dodgers struck first with a walk to Freddie Freeman to lead off the fourth, and he came all the way around on a JT double.  This was JT’s 36th double of the season increasing his career best season for doubles.  Then the rains hit.  The grounds crew did a good job of keeping the infield as dry as possible and kept the rain delay to 20 minutes.

Heaney was more than terrific over the first 3 innings, retiring the first 9 batters he faced, on 38 pitches.  But in the 4th, a single, ground rule double, and walk loaded the bases with one out and Evan Longoria coming to the plate with Joey Bart behind him.  Heaney has been racking up HRs this season, but also strikeouts.  He proceeded to strikeout both Longoria and Bart to escape the 4th.  He breezed through three, but after the rain delay he was not as much in command and he was pulled after 65 pitches: 27 in the 4th.

In 4.0 IP, Andrew Heaney had 8 strikeouts and 16 swings and misses.  This is exactly what Dodger management is looking for in the playoffs.  In his last two starts, Heaney has shown that he should be considered as a starter, but could also be effective in the multi-inning reliever role that Julio Urias proved to be so pivotal in 2020.  With Urias, Kershaw, and Anderson as probable starters, the Dodgers need a RHSP to include in that group.  That figures to be Dustin May.

I think Lewis Brinson would love to play the Dodgers for 162 games.  He has a knack for hitting LAD pitchers well.  He doubled off Caleb Ferguson to open the 5th.  Ferguson worked around the double and should have got out of the inning except for a Trea Turner throwing error on a ball hit by Thairo Estrada that scored Brinson.  Caleb proceeded to pick Estrada off to end the inning.

Phil Bickford continued to shine with a perfect 6th with 2 Ks.  Evan Phillips continued with a scoreless 7th.  In the 8th, Alex Vesia came in and proceeded to walk Heliot Ramos, a .105 hitter.  The kid has great defensive skills, but he cannot hit ML pitching, and Vesia walks him.  Vesia then walked Estrada to put a runner in scoring position with no outs.

I think Joc Pederson was momentarily drawn back into the LAD dugout as he proceeded to strikeout on a failed bunt attempt (???).  Right handed Wilmer Flores then hit a ball to the wall in CF that Cody Bellinger made another excellent read and catch of a ball hit over his head.  J.D. Davis, another RH hitter, crushed a ground rule double that tied the score, but Estrada would have scored easily had the ball not bounced over the wall.  After an IBB, Vesia struck out LaMonte Wade, Jr. to keep the score tied.

The Dodgers got their second sac bunt of 2022 in the 10th from Austin Barnes, moving ghost runner Cody Bellinger to 3B with one out.  Mookie Betts roped a double down the left field line to score Belli.  Trea Turner followed with a line drive to RF that Ramos ran down, allowing Mookie to move up to 3rd.  Freddie was IBB, and SF RHRP John Brebbia then unintentionally walked JT to load the bases.  That brought in LHRP Thomas Szapucki to face Max Muncy.  He walked Max and forced in the 4th run.

In the 9th, Craig Kimbrel got three outs on 11 pitches.   The bullpen was now getting depleted.  Doc did not want to use Tommy Kahnle or Chris Martin who pitched the night before, leaving Andre Jackson and Justin Bruihl to try and close it out in the 10th.

I actually understand bringing in Andre Jackson, or at least was very accepting of it.    Jackson is not going to make the playoff roster, but it sure was important for Doc/AF/BG to see Andre as well as the other 29 teams in a high leverage situation.  Unfortunately Andre walked Thairo Estrada on 4 pitches.

That brought up Joc Pederson.  With 2 strikes, Joc hit a ball that would have been out of most parks, including Oracle Park on most nights. But the wind coming in from RF cut it down for the 1st out in the 10th.  Mookie ran 109 feet (per ESPN) to make a terrific catch. The ghost runner, Ramos, moved up to 3rd.  Next batter, Wilmer Flores, is just clutch with an oppo single on an 0-2 pitch to drive in Heliot Ramos. Why Jackson grooved a center/center 4 seamer on an 0-2 pitch I cannot figure out.  He missed in getting that pitch up and out of the zone.  Jackson then learned and struck out J.D. Davis on an elevated 96.3 MPH fastball, but follows that up with a walk to Evan Longoria to load the bases.

Exit Jackson, enter LHRP Justin Bruihl to face LaMonte Wade Jr.  This was the second time in three innings that Wade came up with the bases loaded with 2 outs.  Last year, Wade was almost automatic in these spots.  Not this year.  After he hits a ball almost into McCovey Cove, but just foul, on a 3-2 pitch, he hits a ground ball grabbed by Freddie who fed Bruihl for the out at 1st to give the Dodgers win #101.

The Baseball Gods were on the Dodgers side in this one.  Two ground rule doubles, one by Wilmer Flores in the 4th and a second by J.D. Davis in the 8th precluded a runner on 1st from scoring.  The Dodgers do not get to the 10th if either one of those hits hit the wall instead of bouncing over it.  Last year, the Giants had all of the luck.  This year not so much.

There were 6 series against the Giants this year. The Dodgers swept 4 of those series, and the Giants swept 1.  Last year, SF had a 10-9 regular season advantage over LAD.  This year, the Dodgers were 15-4 against SF.

I am a little surprised that Miguel Vargas has not had more of an opportunity to make an impression.  But the playoff schedule gives the team more than sufficient downtime before their first NLDS.  Too much downtime?

While the position players roster is undoubtedly set, the pitching is not.  I am looking forward to seeing which of the IL pitchers get activated this week.  Michael Grove will get another chance to audition for 2023 on Tuesday in one of the DH games.  But he will undoubtedly be sent back to OKC when the first pitcher from the IL is activated.

Joc wound up being the straight man for several outstanding catches by the Dodgers.

Dodgers got lucky. A few times.

The WSJ ($$$$) on Andrew Friedman and the World Series:
https://www.wsj.com/articles/los-angeles-dodgers-andrew-friedman-world-series-11663507942

Eno Sarris notes on TheAthletic ($$$$) that spin rates are back up. Innovation is the enemy in this instance.
https://theathletic.com/3591261/2022/09/14/spin-rates-rise-sticky-stuff/
“…But it looks like pitchers have found something clear and wipeable that gives them more of a boost than sunscreen and rosin, because spin rate is back up in baseball. Almost back to where it was before enforcement started.”

The great Jay Jaffe on Trayce Thompson’s redemption with the Dodgers:

“<There’s been> a 4.6-mph gain in average exit velocity and a nearly six-point gain in average launch angle. His groundball rate dropped from 45% in 2015–18 to 29.4% since returning

Baseball America on the AFL ($$$$)
https://www.baseballamerica.com/stories/2022-arizona-fall-league-glendale-desert-dogs/
…Intriguing Prospects: The Dodgers’ Jorbit Vivas and the Twins’ Edouard Julien have two of the most discerning batting eyes in the sport. In fact, Vivas was among a group of 14 players above the complex leagues who played 60 or more games and finished with more walks than strikeouts”

Jay Jaffe chat:
Leland: You’re Farhan Zaidi…what do you do this offseason to make the Giants a Wild Card contender in 2023?

Jay Jaffe: screw the division, go for the NL West. My biggest moves would be to retain Carlos Rodan and sign Trea Turner (you could also go for Carlos Correa but this keeps Turner from returning to the Dodgers). I think they’re the only likely west coast landing spot for Aaron Judge if he doesn’t re-up with the Yankees but I don’t think you could fit all three of those guys on the payroll…

Mike M: How much do the Dodgers playoff hopes depend on a healthy Gonsolin?

Jay Jaffe: They’ll need him to win a World Series unless Dustin May can iron out all the kinks, which is asking a lot given his short track record.

Appa Yip Yip: How is Ross Stripling being so effective this year? Is it just limiting to two times through, or is there something new going on?

Jay Jaffe: Offhand it looks like he’s getting better movement on his fastballs, doing a better job of avoiding hard contact, and getting the good defense/luck behind him where Gausman has not, particularly with the shift on.
Probably worth a closer look, especially if the Blue Jays make it out of the Wild Card series…

Jay Jaffe: Doubt it because I don’t see him being built up enough to last 5 innings as a starter in his return.

Future Dodgers on the Dodgers going to the AFL
Pages, Ramos, Choi, and Dodson are all Rule 5 eligible this offseason. Choi was the Dodgers’ Minor League Pitcher of the Year last season but hasn’t pitched in a game since April—a strong, healthy showing could put him back into contention for a 40-man spot.

Pages should be a lock for a 40-man spot and I have Ramos as a likely option to get one after the Cartaya/Pages/Busch trio. Dodson was among the contenders for a spot last year when he was with the Rays, but probably isn’t in strong contention this time around.

Josh Thomas from Dodgers Digest on the Dodgers headed for the LIDOM draft:

On Yunior Garcia:
“… the exceptionally loud tools are there, and if it ever clicks, look out.”

Baseball America’s JJ Cooper on Vin Scully ($$$$$)
https://www.baseballamerica.com/stories/in-memoriam-baseball-mourns-loss-of-one-of-a-kind-broadcaster-vin-scully/
Who’s the best baseball player ever? The question has many defensible answers.
Ask about the best baseball broadcaster of all-time and there’s only one answer: Vin Scully.

The sweep is nice, but I love the overall win total against them even more. 15 wins in 19 games. How sweep it is!