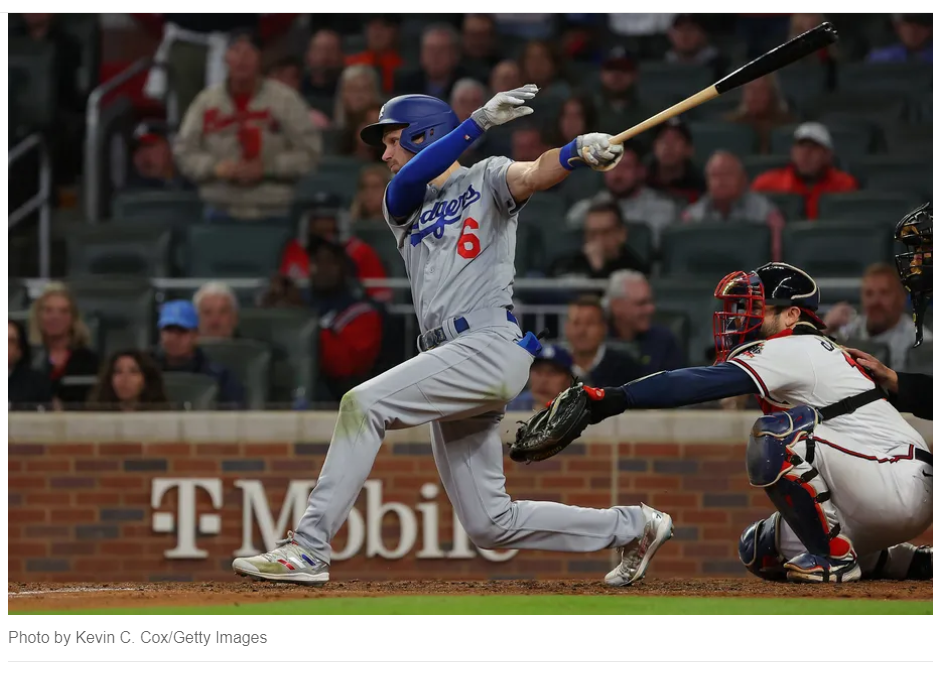 Mike Clevinger has never been much of a challenge for Dodger hitters, and they weren’t again in Game 1.  Julio Urías set down the Padres 1-2-3.  In the bottom of the 1st, Mookie hits a 98.4 MPH shot down the 3rd base line that Machado gobbled up and threw him out.  Trea Turner then slugged a solo HR.  After Freddie struck out, Will Smith doubled and scored on a Max Muncy single.  JT drew a base on balls and Gavin Lux hit the ball on a line but right to Trent Grisham.

The Padres finally got a hit off Urías in the 3rd, a 2-out double by Austin Nola.  He then struck out Jurickson Profar to end the inning.  In the bottom of the 3rd, Trea Turner led off with a double and scored on a 1 out double by Will Smith.  Max Muncy walked, and Gavin Lux hit a run scoring double.  After Trayce Thompson drew a walk, Cody Bellinger hit a ground ball that 1B Wil Myers botched and Muncy scored, making it 5-0.  This was verified as Dieter Ruehle played the Hawaii 5-0 theme song.

But then Urías seemed to hit a wall.  Wil Myers hit a high fly that Trayce Thompson could have caught (not should have) but didn’t.  He jumped into the wall instead of straight up at the wall.  There was some drama that perhaps a fan reached over to interfere with he ball, but it was ruled he did not.  Maybe that play unnerved Julio because he gave up a single, double, fielder’s choice (3u), and sac fly to close the gap to 5-3.

As he has done throughout his managerial career in the postseason, Dave Roberts pulled Urías after 79 pitches.  Can Urías get Machado a 3rd time?  Machado has owned Urías over the years.  Evan Phillips’ job is to come in and face the heart of the order of the Padres, Juan Soto, Machado, and Brandon Drury (Josh Bell).  Unfortunately he had a 7 pitch walk to Soto which was followed by a Machado dribbler down the 3rd base line that stayed fair.  Phillips would then get an 8 pitch strikeout of Josh Bell for the 1st out.  With Wil Myers up and runners on 1st and 2nd, Phillips hung a pair of sliders that Myers fouled off.  Phillips then threw his sinker and Myers hit the ball hard, but right to Gavin Lux who fed it to Trea Turner who turned the DP (even with a double clutch).  That was the KEY AB of the game.

Alex Vesia got 5 outs including Soto in the 8th.  He was left in the 8th specifically to face the LH Juan Soto to fly out to Trayce Thompson.  Doc then went with Bazooka to face Manny Machado.  One pitch, one high fly to Thompson and the inning is over.

While the Padres relievers were just shutting the Dodgers hitters down, Chris Martin came in to close.  He did allow for some drama with allowing a 2-out Jake Cronenworth single bringing up Ha-Seong Kim as the tying run.  On the 1st pitch, Kim flew out to LF Thompson, and CMart got his 1st career playoff save.

It might be tough to ask Phillips to come back on Wednesday, but Vesia, Graterol, and Martin should be able to come back.

The Dodgers were able to score 5 runs without anything from Mookie, Freddie, or JT.  The Dodgers were 3-8 WRISP, and the Padres were 0-4.  Padres relievers, Steven Wilson and Pierce Johnson, might be hard pressed to come back on Wednesday.

Clayton Kershaw will face Yu Darvish for Game 2.  Both managers will be looking for both starters to go at least 6.0 innings.

Finally, here is what Badger wrote on Tuesday before the game…Dodgers favored -222, 7 runs O/U. I’ll take the Dodgers and the over – 5-3.  How are you going to follow that up Badger?

Philadelphia started their #3 SP, Ranger Suárez, while Atlanta was starting their Ace, Max Fried.  This was supposed to be the advantage of the bye team.  However, Fried allowed 6 runs in his 3.1 IP, on 8 hits (including 3 doubles).  He allowed 2 runs in the 1st, 3rd, and 4th.  He also had a throwing error making the 2 runs in the 3rd unearned.

Ranger Suárez only allowed a run, but could only get through 3.1 IP on 86 pitches.  This caused Philly to have to go to their bullpen, which is their wink link.

The Phillies scored another run in the 5th making the score 7-1 going into the bottom of the 5th.  The Braves answered with a walk and a pair of doubles in the 5th to make the score 7-3.

The score remained the same when Matt Olson hit a 3-run HR with one out in the 9th off Zach Eflin.  But Eflin got the final two outs to give Philadelphia the win.

Now the Phillies have Zack Wheeler and Aaron Nola to go in Games 2 and 3, and that could change the outlook of that series.

The first ALDS game also had the road team (Mariners) come in and jump on the Astros and Justin Verlander early.  Verlander gave up 6 runs on 10 hits in his 4.0 IP.

Down 4-0, Yordan Álvarez hit a 2-run double off Mariners starter Logan Gilbert in the 3rd.  But that was just the beginning of the Álvarez heroics.

Yuli Gurriel hit a solo HR in the 4th to close the score to 6-3.  JP Crawford hit a solo HR for the Mariners in the 7th for a 7-3 lead, and the M’s were coasting.

Alex Bregman made it a game with a 2-run HR in the 8th.  But in the 9th, with closer Paul Sewald on the bump, with one out, he hit a batter.  He then struck out Jose Altuve for the second out, and got 2 strike on Jeremy Peña before he singled.  With 2 on and 2 out, manager Scott Servais brought in Robbie Ray to face Yordan Álvarez.  On an 0-1 pitch, Álvarez crushed a walk off 3-run HR.

The 2nd ALDS game went as expected.  NYY’s Gerrit Cole was masterful for 6.1 IP allowing only a Steven Kwan solo HR.  Aaron Judge went 0-3 but Harrison Bader hit a solo HR and Anthony Rizzo belted a 2-run long fly.  A misplay of a single into a single and 2 base error leaving a runner on 3rd with no outs.  The run scored on a sac fly.  All 4 runs were scored on Guardians’ starting pitcher, Cal Quantrill.

1 down 10 to go! Doc pulled the right levers tonight, now let’s get Mookie and Freddie strokin’. You’re right on the nose Jeff–6th inning DP was the key. Evan seemed a little off his sharpness. Hopefully this will get the jitters out and he can settle in. Go Blue!

Was not pretty but I will take it.

I think someone needs to say it:

Urias wasn’t that sharp. Been a very long season for him. Can Kershaw go 7? I wouldn’t bet on it. Anderson will be on a short leash and who is the Dodgers #4?

I think this offense will need to roll throughout this postseason. If it goes through 5 innings of nothing like it did last night it could be very costly going forward

As the Yankee game proved I think Badger, you are going to see SPs go through the order twice and that’s it. Almost across the board.

The stakes are too high and the third time penalty too significant.

The offense turned off again last night. It does that at times, especially against good pitching. We will see good pitching tonight.

So my wife says this morning, “if you win more games than anyone in the league you should go straight to the World Series”. Well, we know that can’t happen, but maybe you should get more than just a bye before you play a short best of 5 series. Any suggestions? I read one is the team with the best record gets to choose it’s first opponent. Not sure about that one as that could provide some serious motivation for whoever is “chosen”. Home field, as we have seen, just isn’t that important.

Raining here in So Cal this morning, but it is supposed to clear up later. 1.6 earthquake about 6:40 last night. Didn’t feel a thing. Trea stepped up and played well. Now we need Freddie Mookie and JT to do the same.

Some of you seem to be worried that half of our lineup produced nothing last night. I, on the other hand, am celebrating the fact that we beat a pesky team without any contribution from Freddie, Mookie or JT.

Tonight will be a real test, because when Darvish is on, he’s just about unhittable. Maybe we’ll be lucky enough to catch him on an off night, or maybe we’ll just hang around and score a couple off their bullpen. Either way, the series could hinge on tonight’s outcome because if the Pads can go to Petco even at 1-1, we could be in for a tough time.

Glad to win game 1 in a 5 game series. Been traveling and just noticed Kimbrel not on roster.

If post season roster built to favor next season’s team, that works for me.

Who, back in spring training, would have thought that Evan Phillips and Chris Martin would be our go to bullpen arms in game one of the playoffs? That’s what makes baseball such an amazing game to me. The bullpen was fantastic last night!

Hoping that Kershaw pitches one of his truly ace quality games tonight. I don’t expect that runs are going to come that easy off Darvish.

The Dodgers are expecting to see a lot of spin from Yu Darvish tonight, and that they’ll have to hunt mistakes (As per the above,Darvish had a 2.52 ERA in four starts against the Dodgers in the regular season)

Alex Vesia is available tonight, but that they’ll try to stay from Evan Phillips

Anderson will start one of the next two games. They’re not planning to use an opener in front of him

The pitching plan for Games 3 and 4 is still up in the air, but that he’s told the team he’s comfortable with whenever they choose to use him

From Houston Mitchell:
If Chris Taylor can’t pinch-hit against a left-hander with two on and two out in the the bottom of the eighth, and you go with Austin Barnes instead, then why is Taylor even on the roster?
Good question.

Also, Joey Gallo, .600, 3 for 5, 2 homers.
But will that be enough to put him in the starting lineup? I hope so because Thompson looks terrible.

Belli back to crowding the plate. He looks challenged.

Everything is hopefully back up and will be running smoothly from hereon. Unless it doesn’t. ﻿ 😭 ﻿

Early word from Doc on his plans for tomorrow.

Gonsolin starts. May has been stretched to 60 pitches and might follow TG.
Barnes will catch, Smith at DH.
CT3 in left, Trayce in center, Muncy at 2nd.
Lux and Belli on the bench.