Is AJ Preller At It Again? 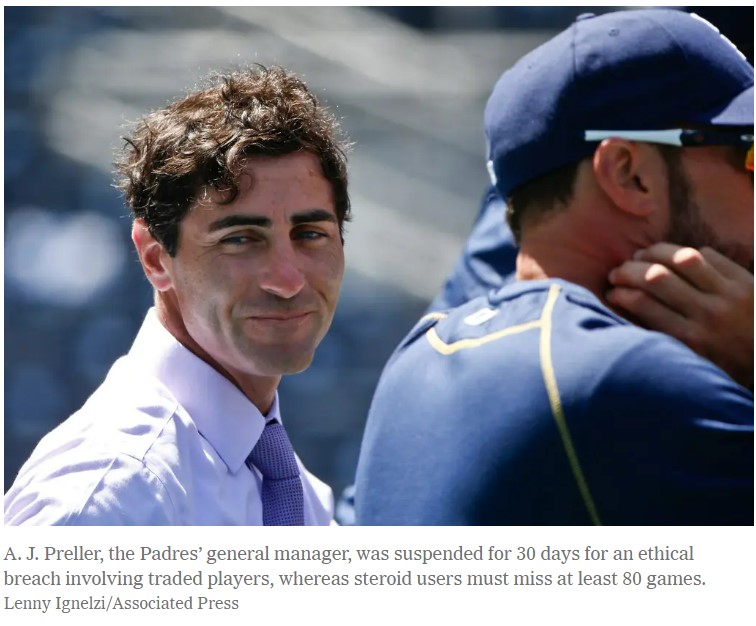 ESPN’s Buster Olney wrote that per multiple reports, San Diego officials instructed their organization’s athletic trainers to maintain two distinct files of medical information on their players — one for industry consumption and the other for the team’s internal use.  The intent was to give the Padres a clear advantage in trade talks.   That clearly was demonstrated in a pair of trades in 2016.

On July 14, 2016, Boston moved one of their top pitching prospects, Anderson Espinoza, to San Diego for LHP Drew Pomerantz.  After the trade was consummated, Boston learned that several preventative measures given to Pomeranz were missing from the files.

Two weeks later, A. J. Preller stuck again with trading RHSP Andrew Cashner, injured RHSP Colin Rea, and RHRP Tayron Guerrero to Miami for RHP Jarred Cosart and two prospects, 1B/OF/DH Josh Naylor, RHP Luis Castillo (yes that Luis Castillo), and RHRP Carter Capps.  Unfortunately, after Rea’s first game with Miami he came away with an apparent elbow injury.  They learned that Rea was undergoing treatment for weeks that went undisclosed.  MLB learned of non-disclosure and instructed the Padres to remedy the deal.  It turns out that Miami traded Rea back to SD for Luis Castillo.

Two months later, Preller was suspended for 30 games; a suspension length that did not go over well with the other organizations.

This was not the first time Preller has been suspended.  As Director of International Scouting Operations with Texas, he was reportedly suspended in the late 2000’s Preller for improper contact with a prospect.

The again in 2015, the Padres were fined an undisclosed amount for allegedly holding an illegal international workout.

Now some are wondering if Preller is at it again.  San Diego tried to package RHSP Chris Paddack with 1B Eric Hosmer, RHRP Emilio Pagán, and $30MM in cash to NYM for 1B/LF/DH Dominic Smith.  The NYM doctors nixed the deal.  Curious.  Why was that?

Not to be deterred, subsequent to that trade fall thru, On April 7, 2022, San Diego traded Chris Paddack and Emilio Pagán to Minnesota for closer Taylor Rogers and AAAA OF Brent Rooker. Paddack left his last start one month later (May 8) with elbow inflammation.  As it turns out, Paddack needs his second TJ surgery.  Are we supposed to believe that there wasn’t anything wrong with Paddack’s elbow one month earlier?  We haven’t any information to persuade or dissuade one’s opinion.  What we do know is that NYM doctors obviously saw something they did not like.

What did the NYM doctors see that the Minnesota doctors didn’t?   His velo has gone down from 94.9 to 93.5.  So there appears to have been something there.  What that is, we just do not know.

Did AJ Preller hide medical information again?  Are the Minnesota doctors incompetent? Or did the NYM doctors just have a sense that something was not right?  Regardless, the Twins have traded their closer and a AAAA OF (and cash) to the Padres for Chris Paddack, Emilio Pagán, and 19-year-old Venezuelan lottery pitcher Brayan Medina.

The Twins needed a starting pitcher and were willing to trade one of the best relievers in MLB for Paddack and Emilio Pagán.  Pagán has started out well for the Twins, but not nearly as well as has Rogers for the Padres.

Are the Twins going to have known cheaters further investigated?  Have not heard, but if I were a Twins fan, I would be screaming for an investigation or an explanation as to why not.

Minnesota is without a very much needed starting pitcher, and San Diego has perhaps the 2nd best reliever in the NL.  Nobody is better than Josh Hader.  Minnesota is supposed to accept that?  Apparently so.

The first thing I thought of was Betts hip and whether Boston hid anything from the Dodgers.

My second thought was to wonder how prevalent this practice throughout baseball.

My third thought was that Peller should have to miss at least much as did Cora. Cheating is cheating regardless how it is dressed.

If MLB does their job correctly (never a valid assumption) and they actually find that he kept two sets of records, he should be banned from baseball, period.

If he did it again after being punished the first time, there shouldn’t be an opportunity to do it a third time.

This is what Mark said over at LA Dodger Talk today:

This is why, for the 3rd time, I have decided not to post there any more. If you have a take, backed up with facts, that isn’t all rainbows and cupcakes, you get abused. Life is too short to subject yourself to abuse on purpose when it serves no purpose.

Singing the Blue
Reply to  dodgerrick

Hope you’ll hang out here on a regular basis. Always nice to have back and forth conversations in a civil manner. Jeff has managed to do that very well over here.

Rick, I don’t blame you. Between Mark and his cohort, penguins and bulldogs (or something like that), who needs the abuse? They are both bullies. I’m surprised anyone still puts up with their childish behavior. Jeff has something Mark doesn’t have: Class.

you cannot let banter on anonymous boards get to you.

these are mostly silly people who have no idea who you are.

it is mostly performance.

Bluto, you, more than anyone, should realize what I’m saying. You get abused more than most on that site. Why put up with it? Life’s too short to deal with those a-holes.

I don’t know why you hang out with those people, Bluto. You should join our septuagenarian high school clique.

Jeff doesn’t have an ego to feed. He doesn’t have to be right, just honest in his opinions by supporting them with the data he finds.

Pillar and Pepiot are with the team in Phoenix.

Preller gets suspended for 30 days. That’s it? He pulls b.s. like that and gets a vacation. These sound like serious infractions. In fact it sounds like fraud. Manfred should step in and drop severe punishments on the organization.

14 pitcher limit has been extended through June 19. This should help the Dodgers navigate until Heaney and Kershaw are ready.

I seem to recall the Kemp deal having a snag because Preller was accusing the Dodgers of not being entirely forthcoming about the state of Kemp’s hip. The Dodgers were annoyed, suggesting it was an 11th hour ploy to get more out of that trade. Sounds like confession through projection on Preller’s part if that is his MO.

I would think Preller’s reputation as a cheat and bad faith actor would hurt more than a suspension. Why would any other owner do business with him?

Because he has what they want.

The league needs to regulate these issues.