JT – End Of An Era – Is Clayton Kershaw Next? 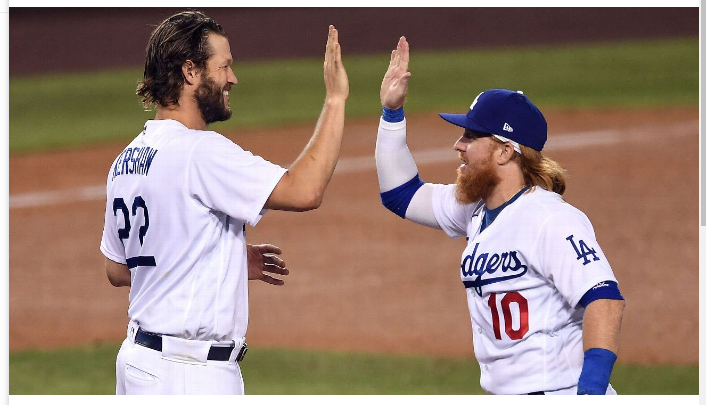 All good things come to an end, and the Los Angeles Dodgers reminded us again that owning and operating an MLB team is a business.  Most of us cannot even begin to think about Clayton Kershaw leaving the Dodgers.  And most of us felt the same way about Justin Turner.  The Big Red Head who went to Mayfair HS in Lakewood, and then moved down to Cal State Fullerton.  He was a 7th round pick by the Cincinnati Reds and moved to Baltimore and NYM before the Dodgers signed him on February 6, 2014.

JT would soon become one of the most popular players with LAD, both in the clubhouse and in the community.  He was the official unofficial captain of the Dodgers.  He also won the prestigious Clemente Award.  Most know his Twitter handle: @redturn2.  I never believed that JT would ever wear another uniform other than LAD, and yet this year (and maybe next year) he will be wearing a Boston Red Sox uniform.  It is a fantastic organization in a fantastic city.  I am glad that the Dodgers will not have to face him in the NL or NL West (as it was rumored he could sign with Arizona).  I do follow Boston, so I will be able to keep up with JT without even trying to remember where he is playing.

In scouring the internet, I found these quotes from Kershaw about JT’s departure.

“This has been the most turnover that I’ve seen in an offseason in a while for us. Our position player group has pretty much been the same for a long time and now with JT and Belli both leaving, it’s going to be weird, it really is. You know JT is such a cornerstone of the franchise and has meant so much to me personally in everything that he does on and off the field. … “We’re going to miss him. I’m going to miss him. It’s going to be so weird to not have him in the clubhouse. I hope he has fun in Boston, just not too much fun.”

With the departure of JT, the LAD players who have the longest tenures (5+ years) to share with Clayton Kershaw is dwindling.  The player and the year that player first played with LAD:

The next two are:

Was it the two year deal he may have sought that sent JT packing?  You will note that not one FA signed by the Dodgers this year has been for more than 1 year.  I do not think that was done by happenstance.

My newest concern is what will happen next year if Kersh still wants to play another year?  It is not the same organization he grew with.  Gone are Joc, Seags, Belli, KJ, and now the noblest of all, Justin Turner.  Will Kersh feel empowered to re-sign with LAD?  Or will his Dallas home be the deciding factor next year, thus ending his HOF career with the Texas Rangers?

I have often thought, and I have written it before…NYY signs every player they want to finish their career with the team…Don Mattingly, Bernie Williams, Jorge Posada, Mariano Rivera, and Derek Jeter, all since 1995.  This year it was Aaron Judge (who cannot be traded).  As a lifelong LAD fan, I grew up hating NYY, but you have to respect a team that holds their stars in such high esteem that they would do anything and everything to make sure they stay with NYY their entire career.

The last Dodger to spend his entire career with and then retire as a Dodger?  It was Mike Scioscia, and before that, Bill Russell. These are the only two players to start their careers with LAD and retire as a Dodger. I would count Andre Ethier, but he was originally signed by Oakland and came to the Dodgers in a trade for Milton Bradley before he started his MLB career.

Two started and ended their careers with Brooklyn:

Two who started and played their entire career with Brooklyn Superbas/Dodgers/Robins:

ESPN has announced their Sunday Night Baseball calendar for the first part of 2023.

That is four games with Philadelphia on Sunday Night Baseball, followed by Texas (2), Atlanta (2), Houston (2), NYY (2), and one each for San Diego, NYM, SFG, LAD, Boston, and Washington.  That is 11 East Coast teams, 4 in Texas,  and 3 California teams.  Not too much East Coast bias with ESPN!  I bet those AL and NL Central teams are feeling the love!

This photo by Jon Soohoo is pretty sad. The only ones looking at the camera are no longer Dodgers. Only Chris Taylor looks away. from Dodgers

Loyalty is not a huge thing in MLB anymore. Free agency means players can go wherever they want if the money is right. Stars get traded or old. JT got old. He did not perform in the last two playoff series as one had come to expect he would. And in my way of thinking, that is one of the reasons the Dodgers lost to Atlanta and this year, San Diego. He is injury prone the last several seasons. I think you can count Ethier if you are counting Furillo and Reese. Both were originally signed by other organizations. Furillo was property of the Reading Chicks. They were an unaffiliated minor league team. Reese was in the Boston Red Sox system for two years before the Dodgers traded two players and 35,000 dollars for Pee Wee. They had a working agreement with Reading, but only after they bought the team. It was said the teams only asset was Furillo. Zack Wheat played 88 games for the A’s the last year of his career. He hit .328 as a 39-year-old. He still holds the record for the most at bats, and games played, He and Russell played 18 seasons for the Dodgers.

Loyalty? When money is involved? No. When it comes to money, we’re all free agents.

And living in hotels.

I do think we should be more amenable to moving, but soooooooo many factors against that.

I have to believe that if the win the whole thing, Kersh will retire. He is checking another thing off of his list as he has declared for the WBC to pitch for team USA. Cody Thomas decided to stay with the A’s organization and accepted outright waivers.

Correa’s deal with the Giants collapses. He just signed a contract with the New York Mets. Gets one less year and 35 million dollars less. WOW.

You have to wonder what were in his medicals. Will the Mets have the same due diligence? Several years ago, the Mets didn’t sign their number 1 pick because of concerns. Will be interesting to see how this plays out.

Mysterious metal disc in his colon..

It may be inoperable. MLB could have removed it by vacating the Championship. A little late for that now.

Correa and Lindor together should make the Mets charismatic champions.

Correa had a verbal agreement with the Giants and reneged, maybe. Yes there was a disagreement between the Giants and Correa over the medicals. That opened the door. Looks like he really wanted to be a Yankee and the Mets are the new Yankees without the pedigree.

If Cohn is spending like this on a player with a medical question then what does that say about deGrom? Texas should be worried.

according to what i read, his doctors and the Giants docs disagreed.

If they need a third opinion I’d be happy to give them mine.

I think Correa will be much happier in NY than he would have been in SF. Just seems like much more of his type of environment.

I hear Andrew is clearing out some office space for Farhan as we speak.

The Owners had to be involved in the hesitation over the medicals just as much as they were with the contract offer.

Giants are looking for athleticism and Outman is said to be the Dodgers best athletic or was that their best athletic prospect. There is a rumor going around and everybody heard it here first — I know because I just started it — Bauer and Outman for Pederson with Giants responsible for whatever payroll Manfred says has to be paid. One caveat is that Pederson has to lose 25 pounds before the trade is approved.

Another rumor trying to find reality: Reynolds for Busch, Pepiot, and Pages.

If Joc has to lose 25 pounds, the deal will never happen.

Farhan is catching a lot of **** for what has happened in an off season that was supposed to bring in big name players. Mitch Haniger, Sean Manaea, and Ross Stripling is just not going to fill those seats. Right now, I would put SF in 4th behind LAD, SDP, and Arizona.

Per Susan Slusser (SF Chronicle), the issue was a discrepancy over an old injury. Did the Giants just get cold feet for a 13 year deal and $350MM and use an old Xray to get out?

Cody Bellinger will wear #24 with the Cubs. His # 35 is assigned to Justin Steele a pitcher.

Was this Belli’s choice? Steele is one of Chicago’s top starting pitchers, and has been with Chicago for 2 years. I guess he gets first shot at the number over a former MVP.

Not sure, but maybe he just wants to change the narrative and a new number is a fresh start. Going to be between 3 and minus 13 here tonight and tomorrow.

Farhan reached for Judge and Correa. It didn’t work out. I don’t know it’s his fault. Besides, both those contracts are extreme overreaches. Fans don’t see that though. It’s not about the last 6 years of those deals, it’s about the first 5. In fact, maybe only the first 3-4. SF will have to wait another year. If they call for Zaidi’s firing, I’m fine with him coming back here.

We don’t need him.

An organization such as ours can never have too many smart people.

The Week That Was
Are The New York Cohens Out of Control?
wpDiscuz
27
0
Would love your thoughts, please comment.x
()
x
| Reply