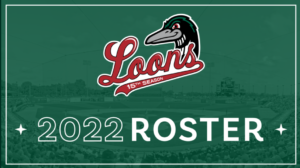 The Dodgers have announced the Loons starting day roster for Friday, April 8.

Of particular interest for me is that seven of the players selected in the 2021 MLB First-Year Player Draft are assigned to the High-A squad after playing just a part season of professional ball in 2021.

Those seven players are all pitchers which is not surprising as 15 of the Dodgers 16 players signed from that draft class are pitchers. The surprise is how quickly they have made it to the High-A level.

Two other newcomers to the Loons staff include right-handers Cole Duensing and Kyle Hurt. Duensing  was signed as a free agent by the Dodgers  in February of this year. He initially had been signed in 2016 by the Angels as an undrafted free agent and was released last August. Hurt came over  to the Dodgers along with LHP Alex Vesia  from the Miami Marlins  in exchange for RHP Dylan Floro.

Of note , Hyun-il Choi was named the Branch Rickey Minor League Pitcher of the Year by the Dodgers in 2021. Also of note, Cole Percival is the son of Troy Percival, a 14-year Major League alum and four-time All-Star.

I thought the catching staff would include, or start with, the Dodgers top prospect Diego Cartaya, but for the moment he is listed on the Rancho Cucamonga Quakes roster. I think that will soon change as 19-year-old catcher Yeiner Fernandez needs considerable play time with the Quakes.

The current catching duo includes returnees Ryan January and Juan Zabala who had short stints with the Loons and Drillers during the 2021 season as well as two games with the Oklahoma City Dodgers.

The infield contingent includes four returning players in Zac Ching, Eddys Leonard, Leonel Valera and Jorbit Vivas. Until game time it will be a challenge to slot them into a position as three are listed by MiLB as shortstops. However, in the now Dodger custom, they were stationed at different positions in the infield last year.  Initially catcher Kekai Rios, who was claimed off waivers from the Biloxi Shuckers last December, was listed as a third catcher on the Loons roster. Although he has never played at any other infield position he is now listed as an infielder.

This is a pivotal year for Leonel Valera as it is his third year with the Loons although his second at the High-A level. Still 22, I might suggest this could be a break out year for him. He has shown good power but has struggled with making consistent contact and striking out too often. Speaking of power, four of the infielders had double digits in home runs during the 2021 season. Valera had 16, Leonard 22, Ching 13, and Vivas 14.

The outfield has Jonny Deluca and Joe Vranesh returning and they are being joined by Ismael Alcantara, Imanol Vargas, Aldrich De Jongh, and Edwin Mateo who all played with the Quakes during the 2021 season. At bat the outfield will miss the 2021 power of Andy Pages and  Ryan Ward. Alcantara and Vargas have flown a bit under the radar. Last season with the Quakes, Alcantara hit .304 while Vargas hit 17 home runs. This could be a break out year for Jonny Deluca. The 23-year-old had 22 home runs during the 2021 season and 64 runs batted in along with 20 stolen bases. Between the Quakes and Loons he posted a triple slash of .264/.348/.519.He struck out 83 times but also walked 46.

Four members of the 2021 Loons have been released by the Dodgers. They are right-hand pitchers Mike Mokma, Cyrillo Watson, Jose Rudulfo and catcher Chase Barbary. It is indeed a tough game.

As a bit of a sidebar, I looked for some other players to appear on the Loons preliminary roster. I was surprised to learn that RHP Elio Serrano, at age-24, had been released by the Dodgers. He is one I have followed since 2016. I also expected left-handers Jeff Belge and Franklin De La Paz to break camp with the Loons. Belge had a rocky Desert Dog experience in the 2021 Arizona Fall League so he may well be retained on the Development List. De La Paz did have a medical issue at the tail end of the 2021 season so that may well explain why he has not surfaced. Hopefully it was not TJ surgery as he was placed on the 60-day injured list in September. 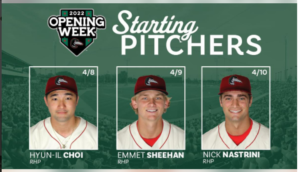 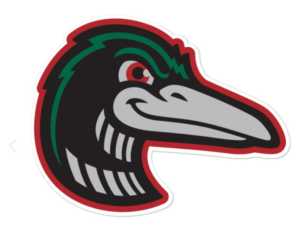 Another player for whom I had been watching during the 2021 season and he never did surface is left-hander Mitchell Tyranski.

Tyranski was selected by the Dodgers in the 12th round of the 2019 MLB June Amateur Draft out of Michigan State University in East Lansing, Michigan.

I followed him during the 2019 season and although he went unnoticed, he had a great start to his professional career. Over 22 innings pitched with the AZL Dodgers and Ogden Raptors he posted a 1.23 ERA and a 0.55 WHIP along with 40 strikeouts and three walks. Perhaps as a 21-year-old he simply overmatched opposing hitters at those levels.

His 2020 season was lost as it was for all minor league players. I watched for him to surface during the 2021 season but on June 4th he was placed on the 60-day injured list and made no appearances last season. I cannot find out if he had TJ surgery but he was activated last November 7th by the Great Lakes Loons.

Now 24, Tyranski has some ground to mkae up having lost the past two development seasons.

The Loons have a lot of questionably good pitching to watch this year. If the offense gets stifled at all, I am really looking forward to seeing Diego Cartaya and Jose Ramos earn their promotions.

Hyun-il Choi gets the bump in the opener. Emmett Sheehan (Saturday) and Nick Nastrini(Sunday) will follow this weekend.

I am really looking forward to talking Loons baseball with you again this year Harold. By mid season the Loons may carry much of the prospect talent pool in the LAD organization.

Harold, I added a picture of this weekend’s starting pitchers.

Emmet Sheehan is the one of the three that intrigues me most. We know much about Choi and much has been written recently about Nastrini.

You are right we do know what Choi is capable of. Returning to Great Lakes, he should be comfortable in that setting. Miller will not be long in Tulsa, and if Choi gets off to a good start, he is a candidate to get the promotion to AA. I am very bullish on Nick Nastrini. I just hope he can get his head in the game because his arm is legit. I do not know that much about Sheehan. He was not overly impressive at Boston College, and had a rough go at Rancho (so do a lot of pitchers). He recently turned 22, so he has time.

The 2021 drafted pitchers I am most anxious to see Peter Heubeck. I know it was only 4.0 innings in the Arizona Complex League, but 9 Ks in those 4 innings is most impressive. 2 BBs and 1 hit. It was a far better showing of how to pitch vs throw when compared to Maddux Bruns who was not nearly as impressive in his ACL showing last year.

I am anxious to see if Lael Lockhart can improve on last year’s time at Great Lakes. 23 Ks in 12.2 IP at Great Lakes was a good start to his professional career. He is a 24 year old reliever who should have dominated. He is primed to climb the organizational ladder quickly, but he is going to need to get to Tulsa soon. So he better start out hot at Great Lakes.

Jeff – you are stealing my thunder. Peter Heubeck and Ronan Kopp are two that I am very interested in from that draft and have researched a bit for a glimpse before too long.

This is good stuff. I will enjoy reading your content.