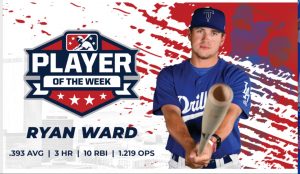 Ward had consistently hit since being selected by the Dodgers in the eighth round of the 2019 First-Year Player Draft out of Bryant University.

As he has been for much of the season, Ward was outstanding last week during the six games at Northwest Arkansas. He went 11-28 against the Naturals for a .393 batting average.

He leads all of AA in home runs in 2022 and hit three during the week  against the Naturals while driving in 10 runs. He also stole two bases and had a 1.219 OPS.

He has now hit 27 home runs during the present campaign – four more than runner up Moises  Gomez of the Springfield Cardinals – and equaling his total in 2021 with the Great Lakes Loons. He is third in the league in runs batted in with 69, four behind league leader Justin Dirdin of the Corpus Christi Hooks.

Ward is currently on the 7-day IL

Need Some Relief – Who Do You Call? 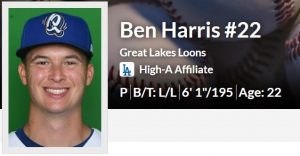 How about calling Ben Harris who was selected by the Dodgers in the eighth round of the 2021 First-Year Player Draft out of the University of Georgia.

Baseball America named Harris as one of the biggest sleepers of the 2021 draft. That assessment came as a result of what BA describes as his spin characteristics no doubt helping him to a 15.4 K/9 ratio with Georgia in 2021 prior to the draft. 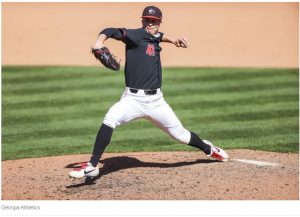 Ben Harris as a Georgia Bulldog

This specifically from Baseball America.

“His fastball sits in the low 90s and touches 95 mph but has close to elite spin characteristics, with exceptional riding life that analytics departments should love. His fastball whiff rate stacks up with some of the more elite pitchers in the country and he gets plenty of swings and misses up in the zone. Harris also throws a slow 12-to-6 curveball. While his walk rate was well below-average this spring, scouts noted that he showed improvement in his control as the season progressed when he stopped nibbling around the zone.”

Harris pitched 5.1 innings in 2021 split between the ACL Dodgers and the Rancho Cucamonga Quakes. He struck out nine but also walked five.

He began the 2022 season with the Quakes and continued to have a high strikeout rate with 59 strikeouts in 37.2 innings pitched. The kicker was that he walked 22.

The 6’1”/195 lb. left-hander debuted with the Loons on June 25.  He gave up two earned runs in his first two appearances and has nor surrendered another run since then. With the Loons, in 13 appearances, the 22-year-old Harris has pitched 16.1 innings with a 1.10 ERA and a 0.67 WHIP. He has allowed only four hits while striking out 30 and walking seven. 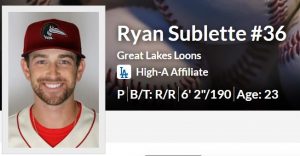 How about calling Ryan Sublette who  has turned into a late inning choice for the Loons.

He was selected in the seventh round of the 2021 draft by the Dodgers out of Texas Tech University. At that time he was considered to be one of the better relief pitchers in college baseball.  He appeared in 19 college games in 2021  posting an ERA of 2.34. In 42.1 innings, he struck out 62 while walking 17. His WHIP was 1.06.

According to Baseball America, he has a 92-95 mph above-average fastball that has late life to generate swings and misses in the strike zone.

This from Baseball America.

“His above-average mid-80s slider is effective thanks to its power and modest break because he does a good job of spotting it glove side and down on the black or just off the plate. Sublette has the stuff of a lower-leverage MLB reliever, but he will have to show he can handle the workload and usage patterns of a pro reliever. He pitched on back-to-back days only twice all season and generally worked one day a week.”

He quite often pitched two innings and did so in both of his last two appearances earning wins by pitching the last two innings without allowing any runs in either game.

On  July 10 he pitched a clean ninth inning. In the tenth with a runner on second a Loons error put runners on first and second. Two stolen bases put runners on second and third with none out. The 23-year-old Sublette then proceeded to shut down the Peoria Chiefs on two ground outs and a fly out. 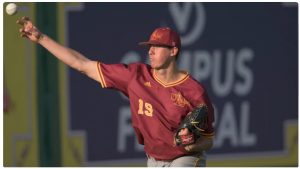 Lucas Wepf was signed by the Dodgers in July following the First-Year Player Draft.

The 22-year-old right-hander was born in Toronto, Ontario in Canada. He attended Christ the King Secondary School in Halton Hills where he earned four varsity letters.

Following high school he played with the Pratt Community College Beavers before moving on to  the University of Louisiana-Monroe for three years.

Pitching primarily in relief Wepf appeared in 39 games in his Warhawk career and made his only two career starts as a senior in 2022. He threw 72 total innings in his career with a 4.88 ERA with 74 strikeouts to 39 walks.

Wepf’s best season in Monroe came as a second-year junior in 2021, where he was one of the top bullpen options for ULM. He made 17 appearances, all out of the pen, firing 34.1 innings with a team-best 2.36 ERA, allowing 12 runs, nine earned, on 22 hits with 36 strikeouts and 12 walks. He picked up two wins and three saves.

He is appreciative of the coaching he received at ULM as well as the support he has received from his family and Andrew Karkoulas who runs a facility called Peak Performance in Guelph, Ontario.

“ULM has a great facility and staff that has helped me prepare for the next level,” Wepf said. “I couldn’t have done this without the help from everyone along the way.”

“I am lucky to be tall standing 6-foot-6. My mother (Lynn) grew up figure skating and my father (Don) swam growing up. Sister, Savannah, earned two tumbling gold medals at the national championships in Charlottetown, P.EI in 2011.”

Needless to say he was delighted to be signed by the Dodgers who have acquired a favorable reputation with player development.

“My family and I are super excited,” Wepf said. “It is the best feeling in the world to get a call from such a prestigious franchise. I got a call right after the draft ended and accepted an opportunity from the Dodgers.”

Yes, good reporting. Don’t know these guys. Assets. To be used in trade?

At this stage of his career, why in the world would Tatis be using steroids? What an incredibly stupid thing to do. Did his agent know? The Padres must be pissed.

“It is very disappointing. He’s somebody that from the organization’s standpoint we’ve invested time and money into,” Preller said on Friday. “When he is on the field, he’s a difference maker. You have to learn from the situations. We we’re hoping that from the offseason to now, that there would be some maturity. And obviously with the news today, it’s more of a pattern and something we’ve got to dig a little bit more info. I’m sure he’s very disappointed but at the end of the day. It’s one thing to say it. You have to start showing it with your actions.”

“I think what we need to get to is a point in time where we trust,” Preller said, via San Diego Union-Tribune. “Over the course of the last six or seven months, I think that’s been something that we haven’t really been able to have.”

“This is the second time we’ve been disappointed with him. You hope he grows up and learns from this and learns that it’s about more than just him right now.”

There was a little bit of anger in his comment as the shortstop let his whole team down with his recent actions.

Reportedly this is the feeling throughout the clubhouse.
﻿

Not much gray area there.

No support not that it has been earned.
Wasn’t Tatis mentioned in the Bauer thing?

Maybe someone can confirm this, as far as the suspension goes:

1) Post season games count toward the suspension. In other words, if the Padres play 6 post season games in 2022, that would add 6 games to the number that Tatis will have served this year.

2) If Tatis serves part of his suspension in 2023 that would make him ineligible for the playoffs next year as well.

Am I correct with the above assumptions?

Playoff games do not count. His suspension goes 32 games into 2023.

That sounds right but I read somewhere that they did.

Ward at 24 isn’t moving up through the minors too quickly.

I just checked and he’s not on the IL so at least that’s a positive.

I can’t remember, was he pulled from a game or was he supposed to start and didn’t make the start?

As far as future Posts go Jeff, I would like to see your thoughts on the starting lineup and rotation and closer in each of the next 5 years showing payroll next to each player and estimated total payroll for that year.

If you include players not already in the organization maybe say if they were free agents or traded for with the key players involved in the trade.

Bums, I can do that. But I do believe that this would best be published in the off season. I tried this a couple years back, but I did not include any traded players or free agents. I also never anticipated Trevor Bauer.