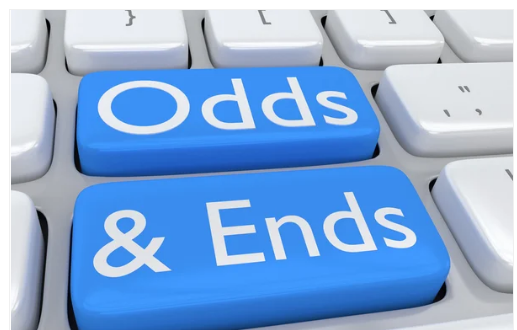 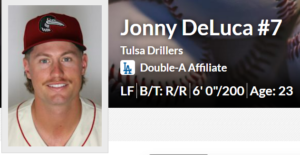 Jonny DeLuca is a repeat selection for Midwest League Player of the Week having also been selected  for the week of June 20-26. The Great Lakes Loons outfielder, now with the Tulsa Drillers, was Mr. Clutch for the Loons during their rapid rise to the top of their division in the Midwest league to capture a first half playoff spot.

DeLuca, now 23, was selected by the Dodgers in the 25th round of the 2019 First Year player Draft. Out of the University of Oregon in Eugene.

This was Baseball America’s scouting report on DeLuca prior to the draft.

“A 5-foot-11, 196-pound draft-eligible sophomore, DeLuca was drafted by the Twins in the 39th round of the 2017 draft, but instead made it to campus at Oregon where he has struggled to figure out the offensive side of his game. DeLuca is an above-average runner with above-average arm strength who was one of the best athletes in the 2017 class out of high school, where he also was a competitive long jumper and track runner, but he’s hit just .224/.293/.356 over two seasons with the Ducks and he’s striking out more in 2019. His offensive performance, combined with well below-average power might make him a tough draft, but if he can figure out his swing he could impact a team with his defense and running ability.”

DeLuca has apparently figured something out. The 6’0”/200 lb. right-handed hitter with below average power has not been an apt descriptor in 2022. He did not impress at the plate in April and May but has been hot ever since with 35 of his 68 hits going for extra bases.

When promoted he had the following standings in the league. 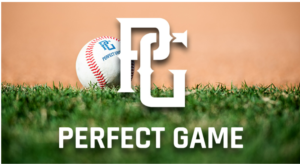 A perfect game is no easy task at any level and especially when five pitchers are involved., That is exactly what happened in the ACL Dodgers 13-0 win over the ACL White Sox on July 2nd.

Justin Wrobleski — who’s on a rehab assignment after TJ surgery — started the game with a strikeout in the first inning. Christian Romero, Luis Valdez, Kelvin Ramirez, and Horacio Andujar threw two innings apiece, combining for 12 strikeouts along the way. The masterful performance by all led to the ACL Dodgers’ 13-0 win over the White Sox. Wrobleski, Valdez and Andujar all have ERAs below 1.00, and the first two have yet to have a blemish on their ERAs this season.

Who has been the Loons top hitter for the past 46 games according to Loons play-by-play announcer Brad Tunney?  There are some good guesses including the recently promoted Jonny DeLuca, Alex De Jesus, Jorbit Vivas and Eddys Leonard. Diego Cartaya would be an excellent guess but has played 23 games with the Loons so the question would be among qualified players. To qualify, a player must have 2.8 plate appearances per team game played. 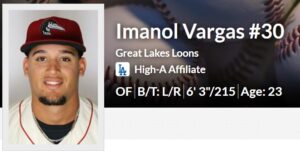 Vargas is in his fifth year of minor league ball having signed with the Dodgers on July 2, 2017, out of Bonao in the Dominican Republic. The 24-year-old 6’3”/215-lb. left-handed hitter has played the entire 2022 season with the Loons.

He started out as an outfielder but has been a first baseman for the past two seasons.

A couple of other notes re: Imanol Vargas.

He became the first player in Great Lakes Loons history to hit a grand slam in two straight games having done so on June 30th and July 1st against the Dayton Dragons.

According to Loons announcer, Brad Tunney, he has walked 24 times on a full count and has walked 48 times this year, five behind league leader Beloit shortstop Nasim Nunez.

Imanol Vargas is the best full count hitter on the Loons roster. 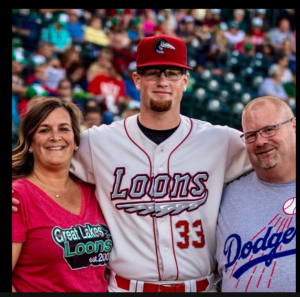 I have been following Jeff Belge since he was drafted by the Dodgers, not because he was a high draft pick, but because he epitomizes the desire and will of these young men to pursue the impossible dream of MLB.

His 2021 season with the Loons was not all he had hoped it would be primarily because of control in which he walked 34 in 43 innings. He did strike out 63.

This year with the Loons, in late inning situations, he has posted a 3.27 ERA and a 1.09 WHIP over 11 innings pitched while walking six and striking out 14. Before a slip in which he gave up two earned runs to the Dayton Dragons on July 4 and recorded no outs, he had given up but two earned runs in his previous 11 innings over nine appearances. Along the way he had two holds and three save in three opportunities.

The 6’5”/225 lb. left-hander has had to persevere to get to where he is now. If we were to meet Jeff Belge we would observe that his right eye is blue and his left eye is green. His eyes tell the story of his commitment to following his dream.

Belge’s right eye — the blue one — has extremely limited vision, only capable of seeing shapes and outlines. It’s been that way since he was 9 years old, when an accident involving skipping stones resulted in one of the rocks piercing into his right eye. The tear required more than a dozen stitches and two surgeries to fix, and resulted in the eye’s color changing from green to blue.

As difficult as it is to believe, disaster struck Belge for the second time in 2015. He again injured the same eye in another freak accident. Goofing around with a friend ended when a finger poked into Belge’s right eye, reopening his initial scar. More than a dozen stitches — again — were required to close the wound, several of which still remain in his eye.

Hopefully he will make his way to the Tulsa Drillers before the 2022 season ends.

In his second game with the Drillers last night DeLuca had three hits includng a triple and a home run. He scored two runs and drove in two.

Imanol Vargas had a home run and two walks. His home run came on a 3-2 count as did one of his walks.

Interesting about Belge. Urias also had issues in a single eye. I don’t think it’s as profound as Belge’s (can’t get much more severe than legally blind, other than truly blind i guess.)

Legally blind in one eye and standing within 55’ of 100 mph projectiles. Brave kid.

Nice job Harold, I never heard of any of these guys except DeLuca. Nice win for LA last night getting the sweep over the Rocks with a walk off. Betts first walk off hit as a Dodger. It wasn’t pretty, but it got the job done. Attendance at Oakland last night was 6300. That is pitiful. Why the team is still there is beyond me. The Dodgers were the only team with over 40,000 fans in attendance yesterday. Only 3 other teams topped 30. Cubbies in for four and the Dodgers will throw, Gonsolin, Anderson, Kersh and Urias. 6-1 on the homestand so far. But the best stat to me, 10.5 games in front of the Gnats.

DeLuca is listed as a left fielder but he has played quite a few games in CF. Hopefully he can play all three outfield positions if he gets to the Dodgers.

I was hoping Betts would not swing before he had one strike as the pitcher was having trouble with his control. He almost hit a comebacker which would have been a 1-2-3 double play.

Great game by White. Pepiot and White stepping up.

Justin is making me a believer.

Deluca played 33 games in right field with the Loons.He is a good outfielder and has a good arm.

For those of you who enjoy watching the Futures Game at the All Star Game, the rosters were released today and include future Dodgers Cartaya, Miller and Vargas.

Cartaya injured his hand, he will probably not play.

Did they say when he was expected back?

Cartaya is DH tonight, and playing.

We’ve traded more good young players over the last five years than anybody,” Friedman said. “And at some point, it catches up to you. … It’s important that we have them. We don’t operate in black and white. And so I’m not sitting here saying we’re not going to, but we’ve been really aggressive over the last five, six years.”

And…“I hate trading for relievers at the deadline,” Friedman said. “It’s my least favorite thing to do. The acquisition cost is totally out of whack. So I like to avoid it as much as possible.”