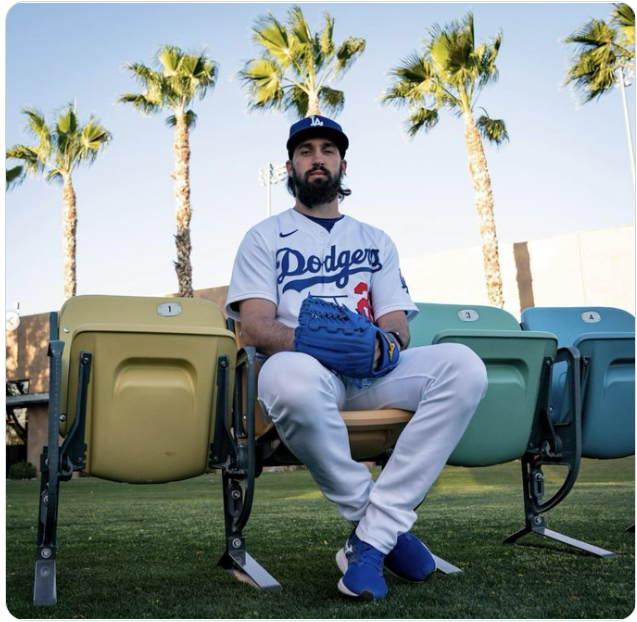 It appeared as if the Dodgers changed tactics and went up hacking the first time through the lineup.  Noah Syndergaard was breezing through 3 innings.  9 up and p down on 29 pitches.  Thor got Mookie on a very questionable call for strike 3 and Syndergaard was perfect through 3.1 IP.

But Mookie started to change the pattern by being more patient.  He got called on a bad call, but the change was in.  Freddie Freeman walked on a 3-2 pitch and the LAD has their first baserunner. Trea Turner followed with an infield single on a 3-2 pitch.  On a 3-1 pitch, Max Muncy grounded into a 4-6 force out for the second out.  With runners on 1st and 3rd Will Smith walks on an 8 pitch AB to load the bases.  Justin Turner follows with the 3rd walk of the inning to force in a run.

Three walks and an infield single to break the 0-0 tie.  Now up 1-0 with the bases loaded and Cody Bellinger comes to the plate to put a hurt on Noah Syndergaard.  Three batters walked in the inning, 5 straight three ball counts, Syndergaard had already thrown 37 pitches in the 4th, and Belli swings at first pitch in the dirt.  He proceeds to strike out on three pitches.  The Dodgers were still 0-2 WRISP and left 3 on base in the 4th.

In the meantime, Tony Gonsolin is breezing through 5.0 innings.  He has allowed one Shohei Ohtani single and two walks.  He is just south of that 15 pitch per inning bar with 72 pitches, with 5 Ks.  Not to be forgotten, but that Ohtani hit was erased by a perfect throw from Will Smith to Gavin Lux on an attempted steal.  Gonsolin kept him close with a couple of throws over to first.  But it was a perfect pop and snap throw to Gavin’s glove that did not need to move.

Chris Taylor hits a bloop double to start off the 5th.  It was originally ruled a foul.  How does the 1B umpire miss the call from less than 10 feet away and straddling the line with the ball clearly bouncing on the line?  Oh well, it was properly overturned and CT3 was on 2nd with nobody out.  Right where the Angels wanted the Dodgers…with a RISP.  CT3 promptly steals 3rd without a throw.  Runner on 3rd and nobody out. 4-3 groundout, strikeout, strikeout, and the Dodgers are now 0-5 hitting WRISP on Tuesday and 2-29 in the last 4 games.

Tony Gonsolin comes out to start the 7th.  He gets Matt Duffy (hitting in Anthony Rendon spot) on a pop up to Gavin Lux.  That was the night for Tony, and with the lefty Jared Walsh coming to bat, Doc went to LHRP Caleb Ferguson.  Caleb got Walsh on an 0-1 groundout to Trea Turner in the shift.  And then induced a pop out for Max Stassi.

Gonsolin made it clear that he felt he could have continued, but as Doc said after the game, that is exactly what he should say.  But Doc had other things to manage.  With the fragile arms on the staff, Doc said the decision was easy for him.

The Dodgers went quietly in the 7th, and Daniel Hudson was called in from the bullpen to pitch the 8th.  He throws 10 pitches, 9 strikes, with 2 Ks and a 4-3 line/ground out.

In the 8th, Gavin Lux just missed a waist high 4-seamer.  The Mookie came to the plate mired in a 2-34 slump and did not miss a hanging curve for his 17th HR.  Freeman and Muncy walked to put still another RISP.  And like the LAD hitters before him, Will Smith could not produce.  As with Gavin Lux in the 6th, Smith hit the ball hard, but for an out.  No attaboys for hitting the ball hard.

Now with a 2-0 lead, Craig Kimbrel entered for a save opportunity.  He K’s Taylor Ward on a nice breaking ball.  On a Mike Trout broken bat pop up, the sharp end of the bat hit plate umpire Nate Tomlinson through the mask into his face.  The pop up?  It landed just beyond Lux’s glove.  It did look like Lux slowed a bit, hearing Cody Bellinger footsteps charging. 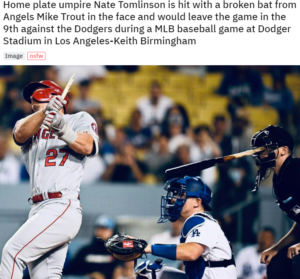 But there was an extended injury delay (9 minutes) to change umpires, and the first pitch to Ohtani is a line drive into right center for a double.  Maybe Belli isn’t hitting, but as I said yesterday, he does play elite defense.  His slide to cutoff the Ohtani double before it went to the wall saved a run and saved Ohtani ending up at 3rd with one out.  It was a great defensive play.  That gets a DRS.  Matt Duffy follows with a BB and the bases are loaded with one out.  On a first pitch center cut fastball to Jared Walsh, Walsh puts a scare into the crowd with a bullet that went foul.  Kimbrel then K’s Jared Walsh swinging on a wicked knuckle curve for out #2. Kimbrel then proceeds to overpower Max Stassi with three called strikes.  Game over.

The Dodger offense is still struggling getting three hits.  But one of those hits was a Mookie Moon Shot.  The team went 0-6 WRISP and they left 6 men on base.  That is 2-30 WRISP and 35 LOB in the last 4 games.

The offense continues their slumber, but the story tonight is Tony Gonsolin and the bullpen.  Gonsolin has another 6.1 shutout innings in still another quality start. That is 6 straight quality starts and 7 on the season.   His ERA is now down to 1.42, BAA .147, and WHIP 0.82.  That is sheer dominance.  He has not had a single poor outing yet this year.  I cannot find enough accolades to give to the Catman.  He just keeps purrrrring along.  Okay maybe he doesn’t know that you need three outs in an inning at times.  But if that is all we can find wrong, how GREAT is he.

Caleb Ferguson is getting closer and closer to be getting high leverage setup opportunities to help Daniel Hudson.  Kimbrel made it interesting, but the delay had a lot to do with that.  He came through when he needed to.

The Dodgers are now tied with San Diego.  Questions are still present, but this was a huge LAD win.

Lowest ERA through first 12 starts in a season (Dodgers history)

You got your birthday wish Bear, a LAD win. Happy Birthday!!

Yeo I am a walking good luck charm.

I quit watching in the bottom of the 4th as it was my bedtime here in the Central Time Zone. Plus after I saw Bellinger’s at bat in that same inning I wasn’t sure if I’d wake up to a Win. Back to that at bat, First pitch swings wildly at a ball, takes next pitch down the middle for a strike and then got overpowered on 3rd pitch. I thought it was a selfish at bat. Don’t take a pitch after Turner drew a walk in the prior at bat.

Glad to see he saved a DRS in the ninth but his at bats are excruciating to watch at times. We’ve been in a horrible slump and can’t hit with RISP and to see some of these players just go into launch mode is maddening. Make contact, put the ball in play son.

I think Gonsolin might be the only starter that wins that particular game. The question remains, how long can he he keep it up?

Heaney throwing 5 at AA is encouraging, but honestly, there are a lot of pitchers who can do that at AA and are not ready for the Majors. All our starters are going to need time off down the stretch. Throwing White, Pepiot, Grove and whoever will obviously help with that but only if the Dodgers are scoring 6-7 when they do.

As for the lineup, nothing new last night. 3 for 27, and 3 for 30 WRISP is scary bad. How long does this continue? The team on paper is a list of All Stars and potential All Stars. They are expected to win. I think every team goes through this, and this is our time. I believe the top of the lineup will figure it out. The middle will have their moments, but in my opinion Muncy and Bellinger need to remain toward the bottom. I still see nobody in the minors ready to replace either of them. I could be wrong about that but I don’t think I am.

Summer is coming. And by all accounts it will be a warm one. Good thing games are played at night.

Can’t replace Bellinger and Muncy? It’s a low bar. Muncy hitting 4th is hard to understand. Maybe the next time the Dodgers have a 4 run lead or even are 4 runs behind in the 6th, both of them get pinch hit for. Send a message. Next message to Bellinger is to ask Trea to start in CF for a couple of games. Two should be message enough and shouldn’t anger Trea too much if it is presented to him correctly.

I think I called Gonsolin the Ace after his third start. No way did I expect him to keep it up like ha has though.

Trea Turner in center. Really? Lux at short? And after doing that, who do you put in the lineup to replace Muncy? Alvarez? Outman? Pages? McKinstry? Alberto? We go with these starters until we just can’t do it anymore. For better or worse, this IS this year’s team

Gonsolin can’t possibly keep this up through October. It would mean 41 starts and nearly 250 innings. Who gives him the break he’s gonna obviously need? Same is true with Urias and Anderson. I see no 200 innings pitchers on this club.

The long haul for this team means the toughest games played at the end of the year. There may be as many as 50 of them to November. Does this as it is currently constructed look like a team built to do that?

Good recap, Jeff.
The umpires continue to amaze me with their incompetence.
Hopefully Kimbrel gained a bit of confidence from last night’s game.

Did Kimbrel fill you with confidence Fred?

There is a difference between ‘a bit of confidence’ and ‘filled with confidence’ Badger. But I thought he did well under the circumtances.

Fair enough. 2 hits, a walk, 27 pitches…. but no runs and 3 K’s. I’d sure like to see my closer keep people off the bases. Doing stuff like that with an ERA over 4 makes me nervous.

If Lux had caught that very catchable pop up, it would have been a different inning. Ohtani is going to hit. I thought Kimbral’s location and velocity were much better.

Catman is the teams ace there is no question of that. Lets see how Anderson rebounds from his last bad outing.

Badger wrote, “Heaney throwing 5 at AA is encouraging, but honestly, there are a lot of pitchers who can do that at AA and are not ready for the Majors”. But Heaney is already a ML pitcher who was on a rehab assignment. The same as when Kershaw went 4.0 innings at low A in Rancho. Kersh was considered ready. Heaney may not be CY caliber like Kersh, but he is a ML pitcher just the same. Heaney got up and down 5 times. He threw 77 pitches and 54 were strikes. That is 70% strikes. After 77 pitches he should be in the 80-90 pitch count the Dodgers like for their starters.

I have no idea if he will be as productive as he was in his first two starts, or regress to his career norm. But after 5.0 IP, he is ready to find out. Either he is a ML pitcher or not. No additional rehab is going to change that.

You’re right of course, I’d like to have seen him pitching against more competitive hitters.