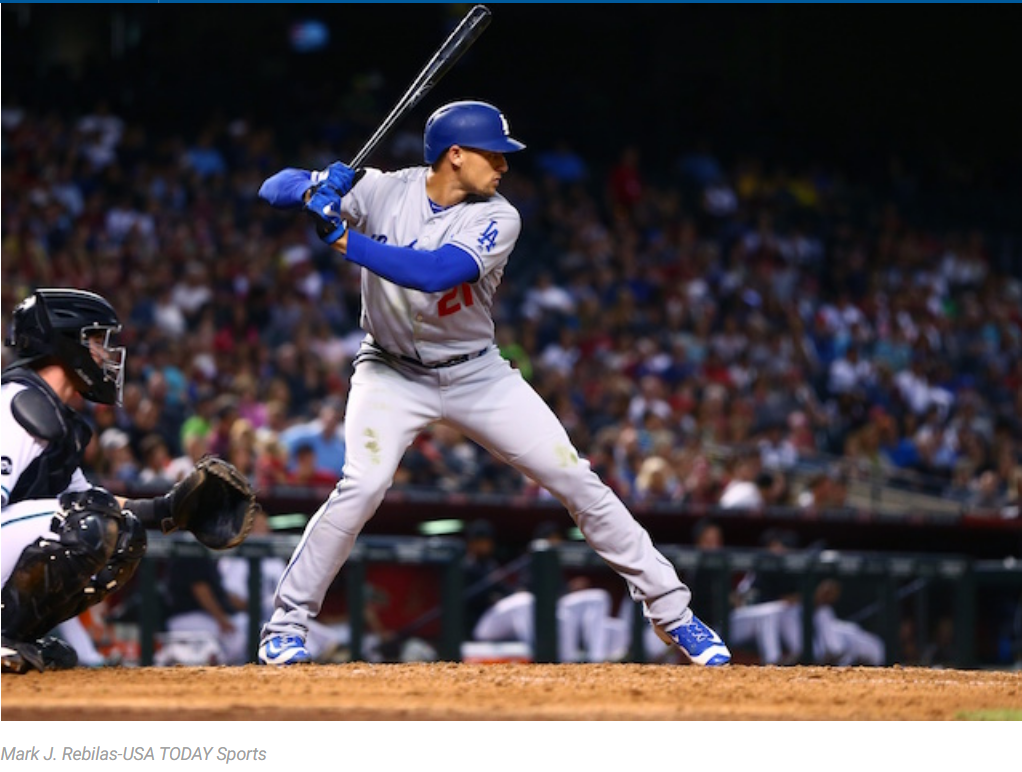 If I remember correctly, Trayce Thompson was a fan favorite when he first played with LAD.  I was certainly a fan, as I saw him as a SVS clone, another of my favorites.

I always thought that Trayce was the potential replacement for SVS (Scott Van Slyke).  SVS is a 6’ 4” 215 lbs RHH OF/1B.  SVS can also play all three OF positions, but his primary position was LF.  Scott was done in 2017.

Let’s recollect some background on Trayce.  You will recall that Trayce is the son of former NBA player and 2-time NBA champion, Mychal Thompson, and brother of NBA veteran, Klay Thompson.  Klay is a 4-time NBA champion and 5-time NBA All Star.  Klay has spent his entire career with the Golden State Warriors.

Frankie Montas was later traded to Oakland in the trade package for Rich Hill and Josh Reddick.  Micah Johnson was traded to Atlanta in 2017, and later traveled around and had a very short-lived MLB career.  Micah was out of baseball after 2018.  He is now a very accomplished painter.  For more on Micah’s painting see here. 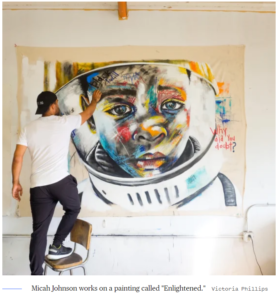 I think the Dodgers now need to trade for Frankie Montas, and hire Micah Johnson to paint his impression of the reunion.

In Spring Training 2016, Andre Ethier was injured, and a roster spot became available.  Trayce capitalized, made the roster and worked himself into a regular role.  Unfortunately, Trayce came down with some back issues.  Come July, Trayce could not go any longer.  Initially diagnosed with lower back irritation, it was learned in August that Thompson had multiple fractures in his back. He attempted a comeback in September, but could not make it go.

During those 80 games, Trayce the Dodgers in several offensive categories. Thompson played in all three OF spots:

Still reeling from the back issue, 2017 never really got off the ground.  He was originally optioned to OKC but was later recalled, but was only a shadow of himself.

On 02/02/20, Thompson signed a MiLB contract with Arizona, but the pandemic wiped out his season.

I did not go through that litany of transactions for Thompson just for the detail. It was to show how resilient, persistent, and dedicated that Thompson has been.

There is no quit in Trayce.  For me, he epitomizes the definition of a junkyard dog.  With all due respect and credit to Mark Timmons, I give this pictorial designation to Trayce Thompson. 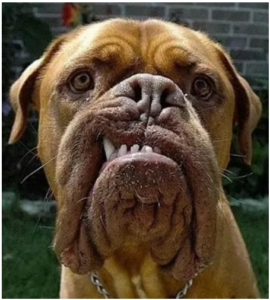 I do not know if he will be a game changer, but he will give it everything he has.  He may not be the elite athlete like his brother, but he is a baseball player.

Welcome back Trayce.  I look forward to your play.

It’s fine. It’s whatever. It’s not going to make or break the season, but it’ll help the team get through until Betts returns.

Hopefully. He is a guy I can root for.

This is a Dodger move?

just read this at The Athletic

#1 Luis Castillo, Reds
Luis Castillo, RHP, RedsAge: 29
W-L: 2-4 ERA: 3.33 FIP: 3.43 IP: 46
WAR: 1.2 (Baseball-Reference) WHIP: 1.087
Castillo is the most talented starting pitcher who could be traded by the deadline and he’s under team control through 2023, his final year of salary arbitration eligibility. He has posted a 3.33 ERA in eight starts, allowing just 35 hits in 46 innings with 43 strikeouts and 15 walks despite three of those games coming at Great American Small Park. Castillo’s fastball has been sitting 96 to 98 mph, and he throws an 88 mph changeup and an 87 mph slider. Opposing batters are hitting .107 against his four-seamer, .269 against his sinker, .180 against his changeup and .226 against his slider. His fastball velocity ranks in the 91st percentile. His chase rate ranks in the 63rd percentile and his hard-hit percentage is in the 68th percentile. Castillo could fetch the best prospect package of any player traded before Aug. 2.

other pitchers of course mentioned, but not connected to Dodgers

What are you willing to send the Reds for Castillo, Badger? It’s going to be a major haul because there will be about 10 teams competing for him.

Are you willing to send them, for example, Miller/Pepiot, Vivas/Leonard, Pages/Busch? That may be what it would take, and I think it’s too much. Maybe I’m overestimating what the Reds will get for him, but if it’s anywhere close to what I have listed here, that’s too much for 1.5 years of Castillo, IMHO.

I have an answer for that question Jefe.

It seldom takes what fans think it will. Castillo is good of course but he’s no Scherzer and he’s about to cost the Reds a lot of money in arbitration then he’s gone the following year. Yes, I would give them Pepiot. After that I just don’t know.

I still think there’s a very small chance the Dodgers trade for a starter, but if they did Castillo and his remaining control make some sense.

As per STB’s guess, the really great trade simulator had one hypothetical trade:

Bruns, Busch and Pepiot for Castillo.

Busch was the first inclusion I thought of, and yeah I would do that. Not sure about Bruns. I think a lot of it will depend on if in fact it’s about this year. That trade is only important if our starting lineup recovers. If Muncy, Bellinger, and Turner are all still OPS’n in the .600’s at the end of July, why trade for pitching?

I am not sure what fans may have expected. He wouldn’t be here if Kevin Pillar did not get injured. The nasty comments that I read on MLBTradeRumors because AF did not go out and get Andrew Benintendi or some other difference maker right now. This team should not rely on Trayce Thompson or Eddy Alvarez. They need their regulars to step up. JT, Muncy, CT3, Belli. If this team needs Trayce Thompson to be the star, they are in trouble. When you only have three starters not on the IL batting above .250 in the lineup, three under .215, and one at a sparkling .153, Trayce Thompson is not the problem.

Things need to be put into perspective. He is a AAAA player, noting more, but one that does not quit. Let’s not expect him to put the Dodger players on his shoulder and carry them to the WS.

For the last few years I have made a game out of offering Dodger players that I felt were overhyped at LADT in trades for close to untouchable players on other teams. I was like if Muncy for instance was soooo good, why can’t they get so in so for him.

I always offered Muncy in trades. He always made me look bad for it. Not this year. Others I regularly offered up were Verdugo, Grandal, Bellinger, and Seager. Seager because I thought if they could trade him for Lindor then maybe the Dodgers would be better able to re-sign Lindor where they couldn’t/wouldn’t re-sign Seager. Well, that and I thought Lindor was the better player.

Players I wanted were Buxton, Gleyber, Hanigar, Lindor, Chapman, and Olsen. Someone at LADT said the Dodgers would be a last place team if I were GM.

Welcome to the Dodgers Trace.

I agree, but will expand it our.

the Dodgers would be a last place team with anyone on this blog or that one as the GM.

I am sure that is true. But that does not account for AF calling me daily to run scenarios by. 😂😂

He and I spend at least 20 minutes a day on the trade simulator together.

Friedman calls me for the same reason Steinbrenner called George Costanza. Did I come close to spelling George’s name right?

JT and Muncy are killing the team. Trayce can not be any worse than those two. Time for some guys to get with the program and start producing. I am looking for major changes to the team in 2023.

If the Dodgers do not go deep into the playoffs in 2022, expect to see a lot of changes. For one, I would not expect JT or Muncy’s options to be picked up.

And while I do not expect it, I have read on a number of sites where they expect Belli to be non-tendered. According to FanGraphs, his fWAR is exactly equal to what he has earned. He needs a 2.25 fWAR to “justify” his salary. He is on pace for exactly 2.25. I cannot see the Dodgers just letting him go, so I will say no to that.

I would also not expect to see a $30MM AAV offer to Trea Turner. Of course this all pre-supposes that LAD crashes and burns before or during the playoffs. If they get to the WS, chances are JT and Max turn their seasons around and the options are back on the table.

If the Dodgers make it to the WS, I agree that probably means JT and Muncy turned things around.

I agree that the odds of non-tendering Belli are miniscule, especially since there really isn’t anyone down on the farm or in free agency to replace him and, as you point out, he’s basically earning his salary just from his defense.

If JT continues on this path, there is no way that AF could justify picking up his option. In that case, the best scenario would be if he would gracefully retire and immediately become part of the coaching staff.

Trea’s future here is a coin toss but my guess is that he leaves. Will Andrew hand the position to Amaya in 2023? I’m guessing not. I also don’t think they plan to have Lux be the permanent shortstop. If not Trea, other worthwhile options on the market will be Corea, Bogaerts and Swanson. I’d rather have Trea but he might prefer the east coast and AF could even go cheap and sign someone like Iglesias or Simmons.

It is never too early to contemplate. You know AF and BG are moving pieces around the chess board. But too much of 2023 plans will be based on where this team will be at the end of 2022. And what prospects will be around after the deadline.

I would not want Carlos Correa under any scenario. I cannot see why Swanson would leave Atlanta, or Atlanta letting him leave. He went to high school 20 miles north of Atlanta. But he would be my choice. I do not think $$$ will be a factor. Xander will be like Trea. I will be surprised if AF signs another $30MM AAV deal. If AF will not pay Trea, I cannot see him paying Bogaerts.

Swanson is having a career year heading into free agency. That will cost the Braves even more to keep him, but I’m guessing they probably will.

Of course I was also guessing they’d keep Freddie.

It will probably play out in similar fashion. He’ll very much want to stay, but if the Braves don’t cooperate L.A. might be one of his first alternatives.

Where most of us expect Trea to get about $30MM/year, I would think Dansby will be closer to $20-22MM.

I wouldn’t trust contract year numbers. Look at his career numbers. OPS+ under 100.

I’m ok with penciling in Lux. It isn’t written we have to have an All Planet shortstop.

Maybe Amaya will really blossom at OKC and be ready to take over at shortstop next year (I know, wishful thinking). Lux can stay at second and when Busch is ready he’ll play left and DH.

I’m fine with that too.

I am still on the Outman bandwagon. 6’3”, wide receiver build (scouting report) athletic with strong accurate arm. He’s a 25 year old OPS’n .946 at AA. I don’t understand that. I hear he strikes out too much. So what? They all do, it’s just a natural by product of the organizational swing for fences approach. If we are going to keep Bellinger I say trade Outman to Cincinnati. He’d be their starting centerfielder right away.